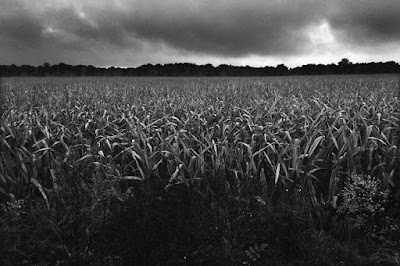 Synopsis:
1.  a brief or condensed statement giving a general view of some subject.
2.  a compendium of heads or short paragraphs giving a view of the whole.
3.  a brief summary of the plot of a novel, motion picture, play, etc.
When someone asks for a synopsis of a play I’m submitting, I wonder exactly what they want. Some folks want to read the entire play start to finish in six or so sentences (as in #3 above). Others want a short one-line idea of what the work is about (#1 above). Most places do not specify which one they ask for.
My dilemma when submitting and see the dreaded words “include a synopsis” is which of these to supply. Should they want the whole shebang condensed, I’ll probably nullify my submission by sending a teaser (#1 above). Who’s going to bother getting back to ask me for the full synopsis? No one. Whoops. Sorry.
In reverse, should they need just a teaser and I send the condensed entirety, that also will probably cause too much effort on their part to rectify the error.
Places that invite submissions are usually understaffed and have no time to bother with trifling mistakes.
Let’s look at the various possibilities.
Teaser: Hamlet cannot decide how to avenge his father’s death and deal with his mother’s incestuous relationship with his uncle, who usurped Hamlet’s lineal claim to the throne of Denmark.
Full synopsis: Hamlet, called back from Wittenberg because of his father’s untimely death, finds out that…
***INSERT 32 PAGES OF DETAILED PLOT REVEAL***
…leading to the entire royal family being murdered during a fencing match, leaving Denmark without a government and now under the occupation of Norway.
Clearly, one must be specific as to which of these they want us poor submitters to supply. Especially when they plan to publish the “synopsis” (really “teaser”) on their web page or in their program. Maybe a middle ground?
Condensed full synopsis: Hamlet’s youth and inexperience in dealing with his father’s murder and mother’s incest causes mayhem in the Denmarkian royal household leading to nearly every character with a speaking part being killed off for no good reason and the whole country taken over by the Oh-hi-just-passing-through Norwegian army.
Hey, honey, wanna see this?
Naaah. I know what happens. Is Walking Dead on?
Synopsis or teaser? It matters. I’ve decided to send both from now on.
Posted by George Sapio at 12:55 PM No comments: 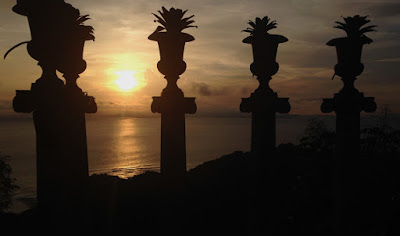 The great miraculous bell of translucent ice is suspended in mid-air.
It rings to announce endings and beginnings. And it rings because there is fresh promise and wonder in the skies.
Its clear tones resound in the placid silence of the winter day, and echo long into the silver-blue serenity of night.
The bell can only be seen at the turning of the year, when the days wind down into nothing, and get ready to march out again.
When you hear the bell, you feel a tug at your heart.
It is your immortal inspiration. – Vera Nazarian

Not sure where I got this from; it was probably leftover detritus from a way-too late-night red-eyed Internet session. But I stuck it into a file I keep for things that plink my cerebrum in a certain way. Yeah, it’s melodramatic and a wee tad new-agey, but it reflects the feeling I’m having about now, that autumn is once again coming, the world is again going into hibernation, and the Carnegie Deli is finally closing after a gazillion years. Funny how you never think of things until you know you’re gonna miss them. Funny how you know you’re going to miss certain things anyway.

Sandwiches literally several inches high. Where do you see that anymore?

Change. Always comes with some cost. Always inevitable. Always unavoidable. It’s the one true expectation: no matter what you do, strive for, dream about, it will change. Get used to everything—everything—being temporary.

I prefer to look at it as Tom Stoppard put it in one of my favoritest ever plays, Rosencrantz and Guildenstern are Dead, in a much leaner way: “Look on every exit as being an entrance somewhere else.”

(And try not to trip over the threshold. It's so inelegant.)
Posted by George Sapio at 3:38 PM No comments: 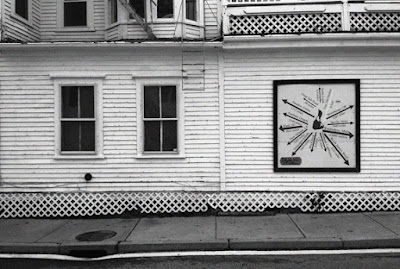 Shorter of Breath and One Day Closer. 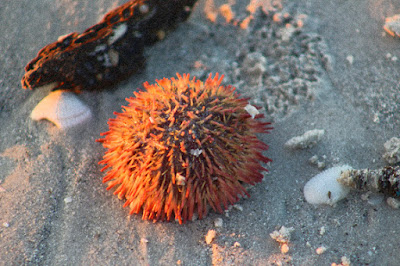 David Bowie died a few days ago. Didn't know him personally, and never saw him in concert. Liked a lot of his music.


Lou Reed passed away last year. Didn't know him personally, and never saw him in concert. Liked a lot of his music.
Both deaths made me stop and reflect significantly. Since my early teens I have recognized musicians and the releases of their singles and albums as life milestones. Music has always been important to me. It said things my heart knew but I couldn’t articulate. It sang about aches and dreams—and sometimes even the cheesiest of lyrics managed to sum up what I was feeling as a nascent adult. (In those days I was soooo melodramatic.)
In a previous blog I ran through how many rock concerts I've attended. Playing an album/cassette/CD/8-track over and over, bopping my head ceaselessly to the beat is one thing, but it's about as personal as . . . Okay, it’s not personal. Watching the real deal, the actual artist, perform live has always been the clincher. When you have played Aqualung about 73 kajillion times and you finally get to see Jethro Tull on stage, up close and for realsies, it is a totally different, mindblowing experience. And if this is repeated with Physical Graffiti, Dark Side of the Moon, Tapestries, Brain Salad Surgery, and about sixty other albums and the artists who made them, well, it starts to become your own personal game with life: Who else can I manage to see before it's too late?
I’m not talking about seeing Paul McCartney before he becomes living-challenged and joins the choir invisible (or I do). This is about watching our lifelong popular icons, one by one, cast off the Muu-Muu of Life and jump on the Jitney to Forever.
Keith Moon and John Bonham, both faves of mine, became room temperature waaaay back, when I was still but a lad of hormonally-crazed teenagement. Shockers both, indeed, but neither's too-early passing caused me any serious metaphysical reflection at the time. And likewise I was too young to be shaken by the deaths of Mama Cass, Jimi Hendrix, Janis Joplin, or Jim Morrison. Never even heard of Phil Ochs. I'd have to say the first “holy shit” moment was John Lennon.
My Dad, steady and loving though he was, was not exactly the most socially progressive guy in New York City. On more than one occasion in the late ’60s and early ’70s I'd heard words such as “long-haired faggots,” “pinkos,” and other such colorful Archie Bunkerisms escape his lips.
So when he put the paper down in front of me that December morning and I read “John Lennon Slain Here,” my heart skipped a beat. Almost as stunning was Dad’s concerned, “Are you okay? I know you were a fan of his.” I'd heard him disparage Lennon more than a few times for his “love-in,” hair, drug use, supposed lack of personal hygiene, etc, but this concern was unusual.
It was the first time I had the glimmer that beautiful things in life really do come to an end. Lennon? Fucking gone? At age 20, having been raised in the relative metaphysical and philosophical safety of a middle-class urban neighborhood, I still had the idea that Shit's Just Gonna Go On Forever. Party on, Wayne.
Those in the lawyering profession have some terms they like to use, among them “slippery slope” and “parade of horribles.” Let X happen and then A, B, G, V, and an endless and unpreventable parade of horrible things will follow. (Lawyers also show their briefs to each other in chambers, but that's just something my immature mind finds titter-worthy.)
How had my parents felt watching the icons they’d lived alongside for 50 years, the staples of their popular culture, check out of the Heartbeat Hotel and grab a seat on the Flatline Express? Probably a little more isolated, a little more aware that we're getting to the narrower end of the Christmas Tree of Life and This Grand Parade of Kodak Moments Most Definitely Rounds the Final Street Corner.
Bowie was only 69, a relatively young man. His creativity and boldness to go where no rock musician had gone before never waned. But, on the other hand, the Stones are all in their 70s and still pumping it out.
In the meantime we said goodbye to Cory Wells, John Entwistle, Stevie Ray Vaughn, Warren Zevon, Joe Strummer, Natalie Cole, Isaac Hayes, Lemmy, Chris Squire, B. B. King, Ben E. King, Joe Cocker, Joey Ramone, and myriad other music icons of my own era.
Who the hell is gonna go next? One gets a chill looking through the list of reunion tours featuring one-hit wonders with bad hair replacements Dodge Dart-ing their ways across the Great Plains over the past 20 years. Or even more remarkable: The Who, minus one half of the original lineup, still crabbily windmilling around stadiums everywhere. “I hope I die before I get old”? Screw that. Party on, Garth.
I'll tell you this: When Keith Richards, who’s outlived all the above mentioned plus Michael Jackson, Elvis Presley, Jerry Garcia, Johnny Winter, Ray Manzarek, Davy Jones and Frank Zappa finally goes, it will definitely all be over.
(Added note: as if this week wasn't morbid enough, we also mourn the passing of someone else way too young to have his too-solid flesh melted, thawed, and resolved into a dew: Alan Rickman. Not an album producing musician, but nonetheless a true rock star in his own profession.) 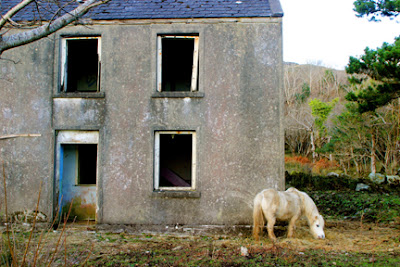 There's a reason it's called a “Company.”

Company n.
1. a number of individuals assembled or associated together; group of people.
2. companionship; fellowship; association.
3. a number of persons united or incorporated for joint action, especially for business: a publishing company; a theatre company.