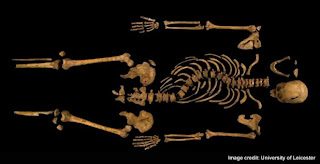 Friends from all over are alerting me to the news that anthropological research teams have found and positively identified the skeletal remains of King Richard III of England. It’s been 528 years since his death in battle and this much-maligned monarch has undergone serious and vociferous debate about his guilt of the murder of his nephews (the jury is still out on conclusive evidence . . . and is likely to remain so).


After his defeat at the Battle of Not-Really-Bosworth (http://tinyurl.com/Not-Bosworth), Richard’s corpse was mutilated and then was believed to have been thrown in a river. It has since been determined that he was buried unceremoniously at Greyfriars church, which then became lost, both in location and in history (Yes, they lost a whole church; records were notoriously few and far between way back then). As it turned out, the remains of the church were found under the now Grey Friars car park in Leicester. Three trenches were dug to investigate the find, and (what would turn out to be) Richard’s skeleton turned up almost immediately.
“The King in the Car Park” became the catchy, if somewhat ignominious, legend by which the skeleton in question became known.
Richard is arguably the most notorious English monarch. His legend is based on the disappearance of his two nephews, ages 12 and 10, the elder of which was the proper inheritor of the throne, Edward V. It has been claimed far and wide that he had them smothered and buried in a hidden grave to eliminate any possible attempts on his usurped kingship. And if you only look that far, it may seem logical on the surface. If you look further, it makes absolutely no sense at all. But that's a whole 'nother blog post.
The news of the discovery and exhumation made a fairly big splash in England and around the world. R3 geeks like myself awaited with abated breath for the announcement that it was indeed the lost king.
In Tweet-Land, as clever dicks around the world are wont to do, the discovery has created more than a few bits of humor (some more clever than others), such as:
And my personal favorites:
Which goes with:
Why, you ask, do I care at all about the long-dead king of our former patriarchal host nation?
Simply because I spent two and a half years researching him for a play I subsequently wrote. A play called “Kynges Games.” It actually doesn't suck at all for a historical play and is quite funny. In spots.
Anywho . . . there's no telling what subject I'll fixate next on, and Richard just fell in one day. What started it all was the thought, “Hey, maybe it will be good for my playwriting career that I should extensively research and write a historical play.”
(Another blog entry will be all about dissuading this farchachdah notion from your brain.)
Richard had all I needed: he was dubiously infamous, very likely evil (which as we knows usually makes for good theatre), ambitious (built-in action), and relatively unknown here in the ex-colonies. So there I went, library-bound, a-reading all I could find on the dude. Soon I discovered that the controversy was much deeper than expected. There were those such as Desmond Seward, whose book, “Richard III: England's Black Legend” pretty much went with the very possible theory that Richard did indeed order the execution of his nephews. He was backed up by quite a few other historians whose publications left no room for doubt as to Richard's parricide. Evidence shows that Richard made some pretty bad decisions in his last years.
But these were decisions that, I argue, were at best lose-lose decisions. He was placed by fate in the middle of a gang war, the Wars of the Roses, and because of the way things progressed and the way others (and yes, Richard himself) compounded the mounting hatred of one side to the other, it was a Gordian Knot and Richard, despite his well-known sense of justice, fairness, and perspicacity as a judge, did not posses the sword to cut it. My proposal is that he was royally screwed from the beginning.
On the other hand, there were, and still are, plenty of folks who stood up for the passed-on Plantagenet, even an international organization dedicated to his historical redemption, The Richard III Society. The debate is heated on both sides.
The evidence, however, for any reliable answer, is woefully non-existent. It just doesn't exist. Records were not kept back then, for any number of reasons. No one really believed records needed to be kept; the practice of news reporting did not exist, and the practice of well-researched histories was also far in the future. Paper and ink were rare, available only to the fortunate or well-off. The ability to read was pretty much contained within the medieval one percent.
There is no definite, reliable answer to Richard's guilt in the disappearance of is nephews.
Which, of course, only spurs on scholars, myself included, to propose alternate theories that fit the known evidence. Other proposed murderers flood the landscape: the Duke of Buckingham (my favorite), Henry Tudor, Margaret Beaufort.
We'll probably never know.
But is is good to know we have finally found him. A mystery has been solved. We know where he is and now we have his computer-generated face, somewhat close in resemblance to the two or three paintings we've had to depend upon all this time. He's actually a handsome fellow.
All I wonder about now is what his reaction would be to being laid at rest in a church and ending up under a parking lot.