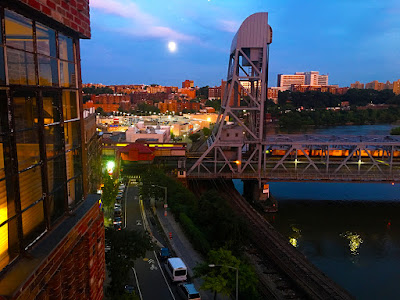 Was reminded of this yesterday:
A number of years ago I was delivering a folder of background reportage to the apartment home of a Newsweek editor. It was a fairly tony West Side, just-off-the-park building, probably a dozen stories tall. I entered the elevator and as the doors began to close I saw a man approach. We both reached for the doors and the man entered, and gave me a curt nod of thanks.
So there's only one man I've ever seen that wore white sideburns in that particular fashion--and carried it off. He looked smaller than I'd imagined. If you live or work in Manhattan, you inevitably have at least one star sighting. And I was standing in an elevator all alone with Isaac Asimov.
It took me eight floors but I finally managed to ask (somewhat timidly, knowing his reputation), “Excuse me. Are you Isaac Asimov?”
He turned to me. “I am.”
“I just finished reading your Black Widower series," I said. "And I've read many of your other works." Then not having any idea where to go after this, I said, “You're a genius.”
The smallest of smiles. As the elevator doors opened, he said “Yes. I am.” And then he walked out.
It could not have been a more perfect moment.