There is no backup. 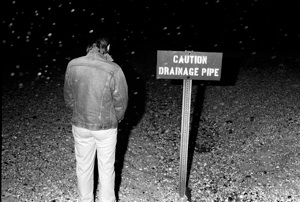 No, There is no backup.

So it took me ninety minutes today to prep and send out the fifty-fourth play submission of the year. Ninety. Minutes. As we playwrights all know, everybody who calls for dramatic scripts wants something different. And the professionals all tell you the same things:
“Keep it simple, keep it short, these people have a million and one submissions to read. Most of them are crap and will make them want to rip out their own eyeballs with a spork. Don't be cute, don't give them what they don't ask for, make sure your spelling and punctuation are letter perfect; you don't want to come across as an idiot. Or worse, careless.  Wait maybe “idiot” is worse. Whatever. Doesn't matter.”

So I had to find ten pages of the new play to use as a sample. I used the beginning, thinking who wants to suddenly start reading the middle of the play? Problem is... ten pages in cut it of mid-scene. Should I go for the cliffhanger effect? It says ten pages. Fine. From now one every damn play I write will have whatever scene runs to through page 10 end on page 10.

First, let me thank you for the opportunity to submit. I'd like to offer you my play, “The Entire Cosmos in 58 Minutes,” a sixteen-act comedic drama with 103 characters, all played by the same actor. Blah, blah, blah. All in all maybe two paragraphs. Salutation, best wishes, sign-off.

Slap on a pdf containing a synopsis, cast requirements, playwright bio. And hit the SEND button.

And there she goes... like a bottle adrift on the ocean. Maybe found, maybe lost. Really, the best you can hope for is a response, a sign of life, a faint pulse deep in the chest of the almost-corpse of your playwriting success saying that your submission was just ONE of the  THIRTY THOUSAND truly exceptional choices they received and the judges were so bewildered they were forced to disembowel their own children as sacrifices to the gods for help in choosing between your play and the lucky winner: “My First Orgasm.”

There's no backup. It's you. All you. No one else. You chose to be there. There's no one to blame except yourself, you big stupidhead. You could have been something worthwhile, like a doctor. Or at worst, an accountant. BOOOORRRRING yes, but they have paychecks.

So I sent out the fifty-fourth one of the year to a theatre that actually sounded like they might be human. Aside from the usual boilerplate submission notice, this place bothered to put in a section titled: “What We're Doing With the Plays We Find.” (And yes, my first thought was “shredder.”) But they sounded like they were looking for plays and playwrights they could invest it... work with over a period of time. Become familiar with and develop a relationship. So I spent 45 minutes crafting a cover letter that included a compliment about the literary manager's blog (which I really did enjoy reading...good stuff there), a little personal information (outlook, philosophy), and something about what my writing is about. More than the usual, I mean. The rest of the time was spent tweaking the script sample. Rewrote a few lines, cut a few more, the usual thing I do whenever I pick up one of my scripts. Then hit SEND.