Rock, Loss, and What I Saw 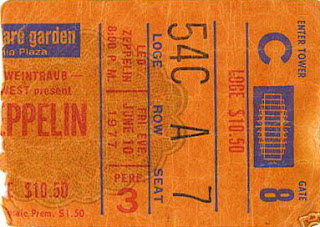 The stubs are gone. Now I just have the memories. Out of everything that passed through my possession, that envelope of stubs is the one thing I wish I could get back.
Back when I still had them, I came up with a magnificent idea to enshrine these evidences of attendance. I knew I had over a hundred stubs. It would have made a great wall mural, framed, with tickets emanating from a central stub. That center stub would have been the most treasured: a house left, just in front of the stage, so-close-your-ears-bled red seat at MSG for one of the June 1977 Led Zeppelin shows. They came on 90 minutes late, played three and a half hours, and by the time the show was done the Garden was so thick with pot and cigarette smoke you literally almost couldn’t see across it. It was my second rock concert ever and I was stunned by the length of the show, the volume, the sheer unstoppable high-level energy. My hearing was stunted for at least a day after that. No concert after that ever beat it for sheer brutal force. It was probably unhealthy in more ways than one, but we were young and indestructible and wouldn’t grow old for, oh, jeepers, at least a few thousand years.
Posted by George Sapio at 6:41 AM 3 comments:

No, Seriously. A Pound of WHAT??