No. It's Just Wrong. 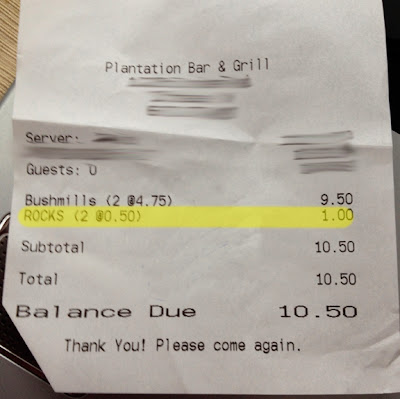 I'm sure we could easily escalate this into something philosophically astronomic about the nature of capitalism and listen to the mega-rich recite their greedy cant about “oh, it's what the market will bear,” but I want to keep this on a local level. I direct your eyeballs to the picture above. The highlighting shows a fifty-cent charge for ice.
The question is this: should restaurants and bars charge for ice in drinks? It's frozen water and contains no alcohol. Most places do not charge for glasses of water (unfrozen ice) by themselves; it's a considerate practice that shows appreciation for the customer. The question is not whether establishments can get away with charging for ice, but whether they should they practice this charge in the first place. It's an ethical (as well as economic) question. Ice has always been a traditional part of many drinks and relatively inexpensive to provide. Bars have to chill certain items as part of their business operations and it would be absurd to think of charging for keeping their olives fresh or their beer cold.
(“Two Buds? You got it. Oh, hey. You want 'em chilled?”)
Many whiskey drinkers won't enjoy their beverages without ice. That's just the way it is. But to tack on an additional charge for something that, in my humble opinion should be part of the drink itself, is pretty lousy. It's ICE, people. ICE. Frozen water. Charging for this is a gouge. Some places in New York City charge $3 or more for the... what? Courtesy? Necessity? What's next? $4 for an olive? Or better yet, as some establishments now offer... get this... “artisanal ice.”
From the New York Daily News, March 2011:
"We get our ice from Okamoto Studios," Dutch Kills bartender Zachary Gelnaw-Rubin said. "It's crystal clear, no bubbles or impurities. It's hand-cut in a way that doesn't dilute the drink or alter the flavor."
Okamoto Studios is a Long Island City-based company that creates artisan ice with an active ingredient that causes the ice to melt more slowly.
Read it for yourself: (http://nydn.us/1bBzChT) (And what the hell is that “active ingredient??)
Once again, my species embarrasses the shit outta me.
And, yes, I'm sure some places simply bury the charge by raising the price of the drink itself. Can't do much about that except drink at some other establishment with lower prices.
But what oh what, Ogee, could the rationale be for some places that practice this? Well, Magilla, it is said that you get “a bigger pour.” And exactly how does that compute? No one I polled, either bartender or barfly, could tell me why drinks with ice get more alcohol in them. One person with longtime bartending experience just shook her head in dismay and declared this statement “a complete load of bullshit.”
Which raises yet another logical anomaly: if an establishment imposes a charge for ice in alcoholic drinks, why do they not similarly and proportionally charge for ice in, say tall soda glasses? Think of it: a tall soda glass is usually filled nearly to the top with ice and the spaces in between the cubes taken up with the beverage of your choice. Following this postulation, I'm sure most establishment owners, should they charge for ice in these situations, could pay off their kids' college loans in a single summer. Big glasses with ice and water are (almost always) free. Tumblers with alcohol and ice get a four bits (plus) surcharge.
Just to clarify, the establishment from which the above receipt came is not the kind of bar at which one would find artisanal laser-cut ice. Its the kind of bar where Tuesday night karaoke manages to condense the anguish content of nearly four of Dante's Hellish circular tortures and refine it into one agonizingly harrowing experience by perfectly replicating the screams of all four levels of said damned and channeling them through the vocal apparatii of several extremely snockered college students to a background of Aerosmith or Eminem.
Times are hard. We know this. But there is a difference between considerate, ethical business practices and gouging. And I have the good fortune to not have to depend on the above establishment for alcoholic refreshment. I am lucky enough to have a closer establishment that, because of the weekly pool league I belong to and my moderate but steady business, frequently offers me a tall, ice-filled glass of ginger ale. Gratis. For which I thank the server gladly and, when I exit, leave behind a respectable tip, usually equal to the cost of the beverage itself.


THAT is good business.
Posted by George Sapio at 9:00 AM 1 comment: