They Talk Lots Funnier in Comedies 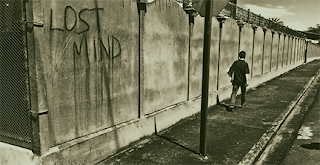 One of the critical elements of both farce and satire is the use of pseudo-naturalistic dialogue--dialogue that sounds completely apropos for the specific world in which the play is created, but specifically designed to remind the audience that the action on stage is in the realm of the absurd. A classic example of this is Ben Elton’s comedic dark tragedy Gasping. Gasping uses this device extensively to bring hilarity to what is essentially a morality tale about the end of the world.

Gasping’s story follows a supreme corporate toady, Philip, as he slimes his way up the corporate ladder. Much like corporate sycophants everywhere who only look at the next quarterly earnings, Philip never stops to consider the ramifications of his brilliant new idea: selling recycled/ processed oxygen. His “designer air” campaign takes off like a moon shot and soon everyone who can afford it is buying into the idea of breathing air that has been sucked from exotic locations.

Designer air (not "cleaned" air) is of course an absurd concept, but something that is totally believable because someone is always coming out with some bit of psychotic nonsense, selling it to an unsuspecting, uninformed, and distracted public. But what starts out as a silly idea quickly turns into a disaster of global proportions.
Elton’s way of keeping this terra-ble death spiral comedic is to load the dialogue with absurdist speeches, mainly between Philip and his boss, the Chief. At first it is a fairly benign element, coaxing the audience into the tone of the play:

Philip: Our corporate hemline is showing plenty of thigh. If this keeps up we’re going to have to move into a very much bigger pair of corporate trousers. Possibly Switzerland.

Philip: Wine glasses the size of buckets…portions so small you think you’ve got a dirty plate and it turns out to be your main course…the very best in executive dining....His muesli is so coarse it could prize open the buttocks of a concrete elephant.

Philip’s love interest, Kirsten, is another character who has no concept of social responsibility. Her interest is purely what other people see in her; she rails against a dinner guest who she claims has over-breathed her specially obtained air one night:

Kirsten: I’m sure he could discipline himself to take smaller breaths, I mean it’s just rude, it’s not as if the stuff just grows on trees. I was blowing some really terrific stuff tonight, Sicilian sucked on the north face of Mount Etna, completely wasted on him, of course.

The company has managed to buy the rights for local and foreign areas of oxygen farming, claiming rights to the gas, then selling it back to the local residents, forcing everyone to buy in. (Exactly like what some actual companies are doing with our water supplies as we speak.) In both the Chief and Kirsten’s minds it’s just good business; in fact they are Elton’s (and society’s) worst nightmare, people who have no social conscience whatsoever and are only interested in profits and prestige.

What eventually happens is that competition arises from other firms and everyone is forced to harvest all the oxygen they can. Soon all of the Earth’s oxygen has been appropriated and millions begin to suffocate, unable to pay the price to breathe. On the corporate level, only Philip seems to be aware of it. The Chief explains the situation and Elton’s thrust of the play in one speech:

Chief: Have you any idea how much grain was destroyed in the eighties? While people starved, how much milk was poured away while babies screamed with want? Nobody likes it Philip, but you can’t just give the stuff away; that way lies financial anarchy.

This speech is so exactly where Elton wants the play to be: deep within the horribly absurd (for those with a social conscience, of course) and thereby darkly comedic because of the unthinkable concept of such a situation. Elton makes use of a real event, the destruction of surplus milk and grain by mega-companies in the 1980s, directly in the face of hunger and starvation, merely for the all-consuming sake of monetary profit. In the end when everyone faces death and the world is entirely without oxygen, Philip decides his only move left is to kill the Chief. Just before they both suffocate:

Chief: …you’re going to realize what a hugely detrimental career decision it is to try and kill your employer.
Philip: It wasn’t made lightly, Chief, and I was so unsure I nearly rang my accountant.

Both men are acutely aware of the colossal destruction, the irreversible tragedy that is claiming all oxygen-breathing life on Earth, and they still cannot think outside their corporate box. It is only Elton's use of absurdist humor is that makes this nightmarish play palatable.
Posted by George Sapio at 9:17 AM No comments: