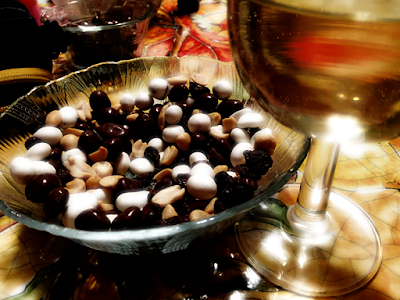 When it comes right down to it, it might just be nothing more complicated than age mixed with organic, unadulterated crankiness, a trait I've been blessed with since the onset of puberty. Possibly tempered with a quiet, mature, temperate voice of Experience.
There are times now, when, faced with two distinct paths, I find myself choosing the one that encourages me to not pursue the looming, glooming argument directly ahead in the metaphorical windshield and the subsequent route through Ulcerville and Ennui Corners via the Agita Highway.
I'm also choosing to let go of the people who want to make me drive there. Some of whom I've known for decades.
Is it really the Voice of Moderation holding sway a lot more than it ever did, telling me sedately and with a really annoying (almost condescending) air of maturity to step back from the fray? Previously this would have caused some over-the-top emotional distress. ("What? Giving up? Running away? No! Quick, grab hold of the mast of self-righteousness and hang on till the last man goes overboard! Death before Desertion!")
Or is it CrankyMan maintaining the melodrama by choosing to pull the Discord rip cord? By opting to flush the whole buffet?
Either way, I just don't have time for this shit anymore. I have more important things to do than agonize over an acquaintance's invitation to a self-righteous political smackdown. Some things we'll never be able to agree on, and when I look at it for more than a minute, I realize that I don't really care anymore.
It used to be important to me to find a way to connect, to find that empathic Venn Diagram overlap. Because relationships of some measure must be maintained, right? And don't friendships have to withstand the monsoons as well as bask in the bucolic summer? That's what I keep telling myself. But more and more, when confronted with unchanging negative situations, I find myself choosing a less futile, more fruitful path. And sometimes I just have to let people fall by the wayside.
I have much less tolerance for self-pitying bullshit than I used to and little to no staying power for acrimonious political sanctimony. (Yet, oddly, I find myself pulling the trigger more and more when the choice is either to Remain Calm and Let It Go, or Just Go Ahead and Say What You'll Regret Not Having Said Later.)
Life is pretty fucking short. I'm extraordinarily lucky: I have more than a few vital, creative, positive, wonderful friends who make me glad I'm still breathing. All of these friends should, in a perfect world, live forever, yet some are now battling cancer. What a senseless, criminal shame. It'll probably bite my own ass one of these days. And I need to spend these coming days, years, or decades doing productive things and surrounding myself with positive, open, intelligent, intellectual, non-baggage-laden friends who know how to laugh raucously, like I-don't-give-a-shit-who's-watching.
I'm out of boxing gloves and hankies, kids.

Posted by George Sapio at 4:57 PM No comments: