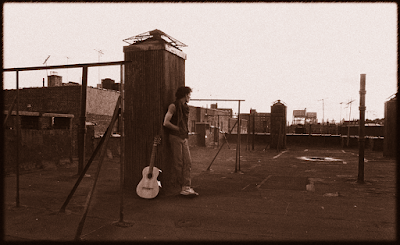 Every once in a while the question comes up: how detailed should I be with my set directions?
For me, the answer is easy. For others it may not be and the difference lies with either experience or preference. Some playwrights feel the use of detailed stage directions is necessary; it is as much a part of the script as the dialogue because it distinctly sets (pun intended) the visual aspect. In most cases a play needs a set. I say “in most cases” because there are those where the playwright is happy to let the actors have command of the bareness, the sheer volume of unimpeded air, the nakedness of the stage space itself. Some plays benefit from this deliberate nondescription, this lack of specificity.
Because it is specificity. Every object on the stage is a tool that helps define the time and place of the piece. Because every object on the stage is either a character's personal property or situational indicator, they should tell us something about the characters, the time, the place, the political situation, the geography. Sets tell us about the vision of the playwright, director, designers; are they realistic or exaggerated? A drawing room with 9-foot bookcases diminishes the actors while accenting the vast array of available knowledge, illuminating the difficulty of attaining the knowledge (those books placed on the upper shelves), and and [promoting] the economic advantages of the person(s) who can afford such luxury.
Or is the set nearly bare, such as the typical set for Samuel Beckett's Waiting For Godot? A road, a tree. (And the road itself can be implied as opposed to created.)
Is it a living room (if so, what culture/era/economic status?) where certain furniture is utilized?
My preference is that nothing should be onstage that is not critical or actually used. I lean towards minimalism for several reasons. In the first place, it's less clutter. Fewer distractions from the action. Theatre audiences don't need to be shown everything. They can imply. I like my actors to have as much attention and command as possible.
Second, it's expensive. I don't know about you, but I've lost beaucoup dinero on productions. It's bad enough to afford a venue, actor and tech salaries, and gosh knows what else, without forking out for a genuine 1930s Appalachin-style wood stove. Maybe the Public or the Mark Taper can shrug this off, but Bad Dog! Productions (“Who??”) certainly can't. On the other hand I was in a production of Mamet's American Buffalo on a set that was jam-crammed with tables of junk shop whatever-you-name-it. Most of the set was “found” or donated. The purpose (in addition to realism) was revealed when the director instructed me to, at the end of the play when Teach realizes that Bobby has been full of shit this whole time and that all his machinations and preparations were for naught, to “Trash the place. Destroy it.” Aside from one obscenely hammed-up death scene in Book of Days, I've never had so much fun on stage in my life.
In third place, it can be indulgent. Listing in detail how everything should be placed, how it should look, in order to transmit a world in exact detail because the play will not work to its fullest perspective otherwise is overkill. Theatre is not an exact science. Theatre is the realm of imagination. In movies everything is done for you. Hence “Lazy brain.” In theatre we leave room for our minds to fill in, amplify, translate what is happening. Theatre is where the audience is to be trusted, not led by the nose. For me, overcontrol of the production by the playwright squeezes the life out of it. By leaving as much to the discretion of the designers and director, I thrill to the idea that every production will be different, that every set will be unique. That every time my work is produced/translated, it will be fresh and new.
I suppose the best and most simple answer I can come up with to the question is: what do you absolutely need to make this play function? And what should you include that is absolutely essential?


As my colleague Arthur M. Jolly wrote: “For A Gulag Mouse, I have a detailed set description. That's partly technical (it really matters whose bunk is closest to the stove - that there is a stove - you can't have a fight about that without it!) and partly as the feel of the bunkhouse in this Siberian prison is important; it's part of the story. For my latest [play], I literally have a single word to say what room we are in, and I'll let the designers handle it. I let the play dictate.”
Posted by George Sapio at 12:43 PM