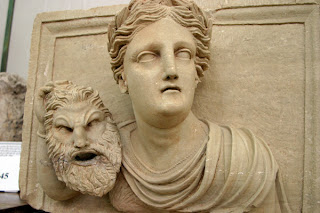 There's a scene in “Terminator II” when the good version of Schwarzenegger's killer cyborg picks up a toddling two-year-old and holds it up in front of his face, staring at it, trying to determine, well, who knows? It's humanity? Purpose? It's a small moment, but a potent one in which we see one being somewhat befuddled by the very existence of another.
So my friend (let's call him) Poindexter is telling me about a trip he will take soon, and on that trip he will visit his (I hope I remember this right) “first cousin, once removed.” A man he has not seen in FIFTY YEARS. I, like the the killer cyborg mentioned above, pick this concept up off the ground and stare at it, trying to determine its reason for existence. I ask the Poindexter/toddler the simple question, “Why?” The Poindexter-toddler shrugs and says all it needs to: “Family.”
“Family.” There are those among us who take this concept and explode it to encompass the vast web of DNA-connection that binds all of us at the atomic stage of kingdom-phylum-class-order-family-genus-species and who will insist that we are all related. (Cue the opening strains of “Kumbaya” or “It's a Small World After All.”)
But if we limit the definition of family from pan-global to Poin's, or for that matter, my wife's, we still manage to encompass a stunningly multitudinous array of perambulatory protein. 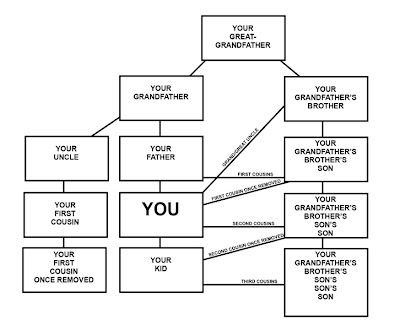 If the above schematic is correct, “First cousin, once removed” means (I think) we go back three generations to great-grandparents. Great grandpa had kids (your grandparents). Grandpa and his brother had kids. Those children produce one of your parents, on the grandpa's brother's side another child who then went on to continue the DNA legacy. So. If you share a common great-grandparent then you are what they call “Second cousins.” Now if your second cousin has a kid, that kid becomes your “second cousin, once removed.” “Removed” meaning “removed from your level of generation and placed in a subsequent one.” Kinda like a nephew or niece but a little farther away on the monkey tree.
Two things strike me at this point: a headache from figuring this crap out, and yes, you can marry your second cousin, removed or not.
So where, (yes, yes, if ever it does) does the concept of “family” lose its wood? I'm sure that if you go back far enough, we're all probably descended from about twelve different people. That makes us removed about 10,000 times. Is that family? Again: when does “family” become null? Obviously it depends on who you are and how you were indoctrinated into the family of homosapiens.
It staggered me when I realized how extensive my wife's family is. First of all, they're Irish catholics, so right off the bat you stand a good chance of populating a small country with them in about four generations. (This despite the fact that some of them are clergy and effectively taken out of the reproducto-loop.) But still. Cousins everywhere. All over the Irish map. And she knows, within a three-generation range, who each is. It's definitely a talent. It scares me.
My own family consisted of my mom, dad, moi, and my grandmother. There were some first cousins, but they were so distant and hardly ever seen as to not matter. There were issues between my mom's WASP family and my dad's Italian working class clan. Or there would have been had they ever actually met. Never the twain should meet, god forbid. You can imagine the bluebloods against the grape-stompers: the class and cultural divides sufficed to keep the tribes quite well apart from each other. According the the DNA rules, I had three brothers from my father's first marriage, but in 35 years I met them each twice. This, to me, is not “family.” Technically, yes, they are close blood relatives, but they are not family. My sister-in-law, no true DNA/blood relative, is closer than any of them and serves as the only “family”member I have apart from my wife.
(To be fair, one of my half-brothers did try to get to know me later on, and I have to say I was less than receptive to the idea. I definitely could have handled all that with more maturity and aplomb, but past issues and the bitter legacy held sway. And I am not the most easily swayed hominid on the firmament.)
I admit that Poindexter's definition of “family” amuses me. To include someone kinda far away on the monkey tree and especially one you don't even know at all as family, well, that indicates to me a generosity of spirit and/or a curiosity in random people that I do not possess.
As my dear old saintly grandmother used to say, I'm a “cranky little fuck.” I don't eagerly adapt to a concept of familial inclusion as readily as others might and I don't follow the general stream of cultural mass indoctrination. (If Mass Mega-Mall America worships it, I do the Groucho “I'm Against It” song; I refused to see E.T. until nine years after it was released; I mistrusted The Beatles for years as 73-hit wonders.)
Our nuclear unit was marginalized, isolated (and split within, also; my grandmother and father were sworn enemies. Made the holidays a wee bit dicey, depending on the level of beer (Dad) and Wild Turkey (grandma) that flowed.). The concept of “family” as represented by popular culture went directly against what had been exemplified by my parents, which was “who needs 'em?”
So P-Dexter's idea of inclusion across the vast generational sea initially confuddled me. “Family.” Yeah, well, technically, I suppose. And what's particularly vexing is that I think, nay, I know, that P-Dex beats me hands down in the “cranky” dept. And yet he's the one who's being inclusive.
Posted by George Sapio at 6:19 PM