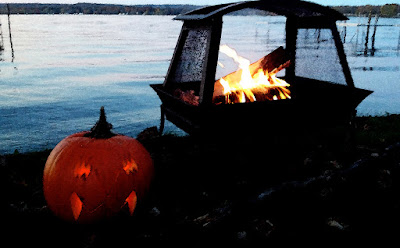 In Part I of this post I promised to address why I encourage everyone at the table to speak their minds freely and openly. Here’s why.
I have this thing about endings. I never start writing a piece until I know the ending. The ending has to be right. By that I mean it has to be perfect for the play. Truthful, not convenient. It has to be the unique destination that the preceding actions in the text have logically dictated. Looking back, it has to have been, as Aristotle said, inevitable. Nothing else will work. Once I know how the adventure ends, I know the play itself.
I despise a gratuitous wrap-up, a crowbarred feel-good ending where, for the safety of the audience's emotions (and the promise of further ticket sales) the resolution is deliberately manipulated to maximize positive responses. And the very worst: a deus ex machina, a last-minute reprieve featuring the most sketchy manipulations. Case in point: a hero, who has fallen into a vat of toxic chemicals and logically (a) drowned or (b) been fatally poisoned, suddenly reappears dripping and ecstatic, claiming to have survived by using his emergency inhaler. While submerged in toxic waste. For close to ten minutes. You’ve seen these deus ex rectums a hundred times. Tell me you never felt cheated.
So the ending to The Viking Suicides. Stage one: the idea bounces around the cranial area. This could last from a minute's worth of time to forever. In this case it was a couple of weeks. Stage two: Immediately after writing it down for the first time it I looked at it and had to take a breath. Now it was in print. It had physical form for the first time. Makes a difference seeing it on the laptop screen. Have to admit: This was a rough one. Disney fans would probably crap their Hello Kittys.
I took a couple of days’ break then came back to it. I had come to two decisions: It was absolutely the most correct ending for the play, and despite thinking that I may have just killed any chance of it getting produced, I loved it.
A successful sign of a good workshopping team is that they throw everything onto the table. So when the director addressed the ending, they all went silent. Oh great. The director wouldn’t look at me. Finally someone said “Yeah. It works. But it’s really mean.”
"It works." So it's not just me. Now...Is it logical? Does it seem inevitable?
Someone else: “It wasn't until we read it aloud that I saw how powerful it was.”
“Powerful.” There’s a good word. Okay, let's keep going. I'll take Critical Observations for $600, Alex.
Next: “But.” Pause. “I didn’t see it that way. It could be seen as a compassionate thing to do.”
Silence.
Insert wide-eyed, head-shaking emoji here. I looked at the director, my eyebrows slamming against the dropped ceiling. She just looked back: Shut up. Let them talk.
“Next” went on: “Think about it.” And proceeded to outline a line of reasoning that would never have occurred to me in ten years, but got us all thinking. And them talking again.
It very well could make sense. A director with a different turn of psyche could feel the same. After all, one of my actors just did and the rest agreed it could be interpreted that way. If they'll give it legitimacy, so will an audience.
If anything, it could be at least as dramatic and shocking as my original intent. I could be tempted to leave it as actor’s choice how to play it.
But I haven't decided that yet.

Posted by George Sapio at 7:26 PM No comments: 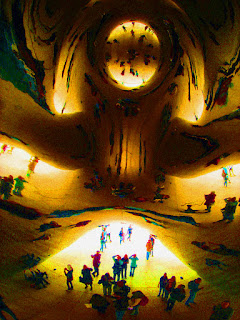 Posted by George Sapio at 3:21 PM No comments: